Well, it was a long time coming, but I finally have an initial version of the plans for my own version of what the Rio Grande Southern might've become had it lasted beyond 1952. Construction has begun, but I'm always open to improvements, suggestions and wise-cracks! Email me at ! Thanks.

Layout construction, historical mutterings, and lots of detailed workshop-type postings about modeling are posted in my RGS Thoughts & Mutterings blog.

Since it's a lot easier ad faster, the main collection of layout photos are on Steve's RGS Facebook pg, including many shots of each town, taken over time as the construction has evolved.

Operate the layout - with TrainPlayer!

A version of this layout was used in the early beta testing of a simulation program called TrainPlayer. This is a great piece of software that lets one actually 'operate' a layout, including running trains, switching towns, etc. My layout was one of several posted for beta testers to use, and I got a lot of great feedback on the early design from those testers.

My design improved because of that input! My layout from that time is still posted and I believe is included as one of the layouts you can operate if you purchase or try out the software. TrainPlayer used to be Windows and Mac, but now is offered only for Windows. Still - great software and I highly recommend it.

Here's the layout design; medium and larger versions are also available. You can see how the design has evolved, based on input from lots of kind folks, by looking at an earlier 2001 design. I used Empire Express to create the drawing, and then used a CAD program on a Mac to add some additional colors and labels. 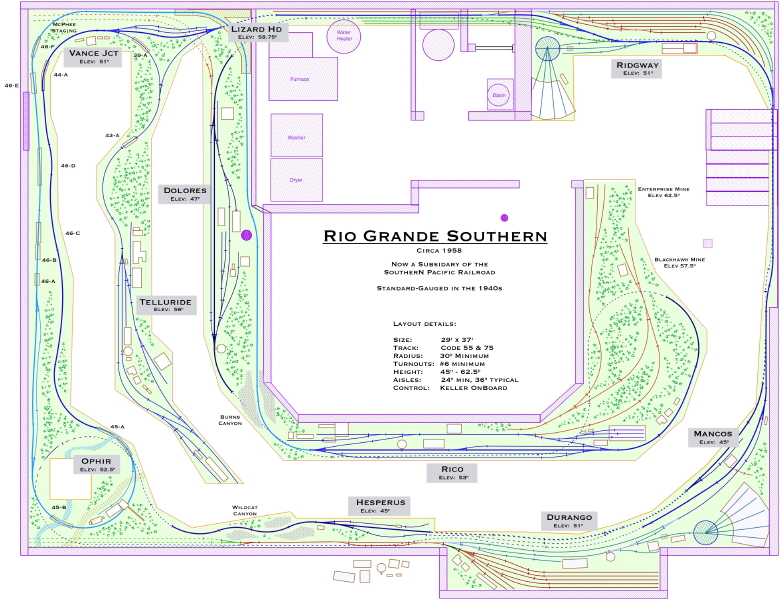 I hope to add a more complete history later, but essentially what I propose happened is this: at some point the line was standard gauged, as management hoped to capitalize on the std-gauge Farmington branch out of Durango, and also make itself more attractive for through freight heading for Grand Jct and beyond.

The Southern Pacific, around 1910, was looking to find a way into Franklin Jct or Durango for access to the coal fields. Attempting to help them (and of course gain profits), the D&RG built a std-gauge line south from Durango to Farmington.

There's a longish story behind this move - copper mines in Bisbee (Copper Queen Mining Co) and Morenci (Phelps-Dodge) Arizona used huge amounts of coal, and wanted cheap coal locally, from the coal areas near Durango. These folks sent a delegation to Durango in 1905 to explore options with the D&RG and RGS, but nothing came of it. Instead, they purchased coal interests in Dawson, New Mexico, and built two railroads to move their coal to their copper mines. The first line was the El Paso & Northeastern, and the second the El Paso & Southwestern (from El Paso to Benson). These merged under the EP&SW name, by they extended to Tucson. Also in 1924, the merged lines were acquired by the SP in 1924, giving the SP it's first access to the Bisbee area. Today, the old EP&NE is part of the UP line from El Paso to Tucumcarri, while the EP&SW is mostly abandoned.

The RGS was std-gauged with SP funding, and the SP connected to the southern end of the Farmington branch. The D&RG line from Ridgway to Grand Jct was also std-gauged (by the D&RGW). This, after some negotiation for trackage rights) gave the SP a connection all the way from it's southern main line to it's western connection at Salt Lake (via Grand Jct).

But, the bottom fell out of the economy in 1929, long before the SP had completed all the work it intended on the RGS. The work of std-gauging the line was completed, but not much else. The line remained 'just operable' for many years.

There were benefits, though: mining operations around Ophir, Rico, and Telluride were able to hang on, as shipping to points north and south (beyond the NG empire) were now economical because of the SG connection via the SP. Coal and lumber from the south end was in high demand, and ore operations on the north end, while not overly profitable, were at least able to remain open. Much later, the SP was also able to add passenger runs into Telluride, as that town began it's conversion from mining to ski resorts. All of these factors helped the RGS to survive, essentially as a partially-owned subsidiary of the SP.

Today (about 1958 or so) the line is running, but improvements are still coming and the infrastructure has a long way to go. A couple of diesels have been purchased, but aging steam still rules this roost. The track is passable but could use a lot of new ties and ballasting. Bits and pieces from NG days litter the landscape, w/numerous boxcars and old b&b cars serving as offices, sheds, bunkhouses and even depots. Here and there old bits of abandoned spurs and sidings may be seen. But times are changing - the SP occasionally runs scenic tours using chartered Daylight streamliners into Telluride, where talk is beginning about resorts and skiing. Dolores is still generating healthy amounts of lumber from McPhee (regrettably not able to be modeled), and coal is still in high demand. Thru-traffic from Farmington abounds, and there's still a bit of mining above Rico thanks to some new owners and new uses for the ores available there, and economical shipping to points north via the SP.

Here's the layout's stats calculated according to Joe Fugate's suggested layout comparison stats, when the layout was first designed.. It was an interesting exercise... All the sq footages and lengths are approximate. Since then, there were a couple changes to spurs in Dolores, and an added stockyard spur replaced once of the class tracks at Ridgway. But, still pretty close to the original used for these calculations.